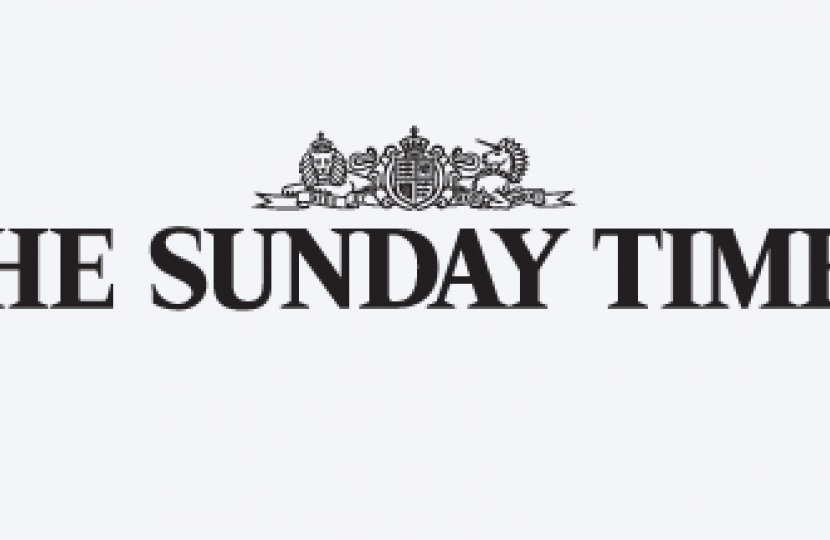 "Michael Tomlinson is not a household name. The Eurosceptic Tory MP for Mid Dorset and North Poole was a barrister before entering parliament four years ago, and is not given to attention-grabbing statements. Yet he might just be the most important person in Britain you have never heard of.

Last week he was one of 20 Conservative MPs who voted against Theresa May’s plan to let MPs vote on a delay to Brexit if they do not approve her departure deal this month.

On Friday he was named as one of the eight members of a legal “star chamber” set up by the European Research Group (ERG), the hardline Brexiteers led by Jacob Rees-Mogg. And therein lies his significance. The star chamber will rule on whether the government has won sufficiently robust concessions from Brussels.

The so-called Cash committee, named after Sir Bill Cash, the veteran Eurosceptic, will mark the homework of Geoffrey Cox, the attorney-general, who is seeking a legally binding admission from the EU that the planned Northern Ireland “backstop” cannot lock Britain into a perpetual customs union with Brussels. As one of the most hardline Brexiteers in the group, Tomlinson’s vote will be crucial to the fate of May’s deal.

In an interview with The Sunday Times, Tomlinson revealed the three tests the Cash committee will use to judge whether Cox has obtained a good-enough deal, after parliament rejected the original plan by 230 votes.

“The mechanism has got to be legally binding, so effectively treaty-level change,” he said. “The vote in the House of Commons was very clear. It was an expression of unhappiness from across the House about the backstop.

“The second part is the language. It can’t be a reinterpretation of the withdrawal agreement or a re-emphasis; it’s got to be really clear language as to where we are going.

“In the advice that the attorney- general sent to the prime minister, which was subsequently published under duress, his concern was that the backstop could ‘endure indefinitely’. That set alarm bells ringing. There has to be clear language in what the attorney-general comes back with, and that, in his legal opinion, ‘endure indefinitely’ has been taken out. The third requirement is a clear exit route.”

Interestingly, ERG sources acknowledge that the three tests have been drawn quite broadly and do not seek to be prescriptive about the mechanisms Cox uses to get a legally binding change. This is a change of approach from the days when Eurosceptics ruled out legal codicils or letters of clarification.

Tomlinson explained: “There is a spectrum and a range of options that the attorney-general has, but I’m not going to say protocol, good; codicil, bad; letter, very bad; because that would be prejudging it. We are waiting to be convinced.”

The ERG’s paler red lines emerged after a week in which Rees-Mogg appeared to strike a more emollient tone, abandoning his demand that the backstop be removed. The three tests appear to give Cox some wiggle room.

The Cash committee also includes Dominic Raab, the former Brexit secretary and an international lawyer by training, and — crucially — Nigel Dodds, the Westminster leader of the Democratic Unionists, whose views will influence a sizeable number of Tory backbenchers.

Downing Street fears there are still some Tory MPs who will never accept the deal. One insider described the ultras as a “death cult” that has been growing around the ERG deputy leader, Steve Baker, who has privately dubbed the attorney-general’s plan “Cox’s codpiece”.

An analysis of the publicly stated views of Tory Eurosceptics, compiled by the People’s Vote campaign, found that a total of 96 Tory MPs have demanded changes that look impossible to deliver: 43 want a complete removal of the backstop; 34 demand a strict time limit on it; and 31 call for a unilateral exit mechanism from the backstop. The number adds up to 108 because some MPs aspire to more than one “impossibility”.

But Tomlinson says that if Cash and Dodds signal their approval, dissent in ERG ranks will be negligible, as Baker will be on board. “I think both Jacob and Steve would be equally persuaded if Bill says it works,” he said. “Both respect Bill and would be persuaded by that.” Another source said star-chamber backing for May would reduce the number of Tory dissenters to “a dozen or less” — a figure likely to be outnumbered by the 25 to 30 Labour MPs expected to support the deal.

None of this means a deal for May. The ERG’s demands might still be too much for the EU to contemplate. Cox initially told MPs he hoped the EU would agree to reopen the withdrawal agreement or concede a unilateral exit mechanism, but both seem to be off the table. Last week the attorney-general told a friend he was much less optimistic, admitting the negotiations are “extraordinarily difficult”.

He has privately expressed irritation that he was appointed and asked to save the day long after the prime minister had signed up to the backstop. “He felt his client had rather dropped him in it, because he always likes to win his cases. It was not very helpful when his client brings him in at the very last minute.” The source added, however: “His eyes were still twinkling, so I took from his demeanour that not everything was lost.”

To make matters worse, ERG sources say Cox has privately dismissed the legal effectiveness of one of the devices he is now seeking to use: a belief that the 1986 Vienna Convention allows any party to a treaty to walk away. “He told people it didn’t work,” one MP said. “Now he’s using it to cook up the codpiece.”

Michel Barnier, the EU’s top negotiator, complained to ambassadors on Friday that there had been “no progress” in recent negotiations. A delegation who met with Barnier late last month said he was “agitated” and appeared more worried than before. But yesterday Barnier made warmer noises about a joint protocol between the EU and the UK.

In Brussels, there is talk that Martin Selmayr, the EU’s top civil servant, has engaged with the process and — counterintuitively for those who have labelled him a “monster” for his anti-Brexit stance — become a key figure. “Martin is a menace and wholly untrustworthy, but he’s a brain, too, and a fixer, and he wants to get the withdrawal agreement over the line,” a British source said. “No 10 now understand that they need his creativity to get something for Cox to sell.”

Tory whips are going to extraordinary lengths to twist the arms of ERG members. Last week, a senior whip urged one MP to vote for May’s deal by promising it would hasten her departure from No 10. He suggested that senior figures would arrange for “men in grey suits” from the executive of the backbench 1922 committee to visit the prime minister with a letter signed by more than 117 MPs — the number who voted against her in December’s no-confidence motion — giving the PM her marching orders.

Last week, an ally of Boris Johnson was sounding out colleagues about the prospect of 40 of them giving May an ultimatum: “The idea is that unless she agrees to go immediately after Brexit, the group would go on strike and refuse to vote for any government legislation.”

With more than a dozen candidates considering a tilt at the leadership, MPs say Johnson recently sidled up to fellow Old Etonians in the Commons and suggested they support him in the contest.

He has been wooing Amber Rudd, the work and pensions secretary, who is seen as the figurehead of the remain MPs, but who has abandoned her own leadership ambitions. “Amber is about as popular as Himmler with the grassroots,” one Tory observed. “But she would be a great help to Boris.”

Separately, remainer cabinet ministers are plotting to ensure that Brexiteers are denied the leadership. Supporters of other frontrunners have discussed a vote-swapping exercise to ensure that the two candidates presented to party members do not include Johnson or another Brexiteer. “They’re planning to share out the votes to make sure Boris doesn’t get into the final two,” a source said.

May’s hopes also depend on the number of Labour MPs prepared to back her. In an attempt to dissuade Labour MPs in “leave” seats from voting with the Tories, the People’s Vote campaign today publishes polling data from a YouGov survey of 5,000 Labour voters in the north of England and the Midlands, showing that they support the party’s change of tack to back a referendum by a margin of three to one. About 75% said they agreed with Labour’s decision; 35% said it made them feel more favourable towards Labour, compared with 14% who felt less favourable. If there is a new referendum, Labour’s heartland voters would support staying in the EU by 76% to 24%.

With the Commons vote going to the wire, experts in London and Brussels are war-gaming a potential UK request to extend article 50 beyond the deadline of March 29. The EU is ready to give May a couple of extra months, but would only grant a longer extension in the event of a second referendum or general election.

After Jeremy Corbyn last week announced that Labour now backs a second referendum, his whips are drumming up cross-party support for an amendment that would allow May’s Brexit deal to pass, but only if it is put to a “confirmatory referendum”.

The amendment, by Labour backbenchers Peter Kyle and Phil Wilson, will be put to a vote on the day May tries to get her revised Brexit deal through the Commons. Gavin Barwell, the prime minister’s chief of staff, has also spoken to its architects, according to sources.

In Downing Street, the calculation is that the prime minister might need two votes to get her deal through. Officials refer to the next meaningful votes as “MV2” and “MV3”. The theory is that if May can slash the majority against her from 230 to “a few dozen”, she has a chance of sealing the deal in a third vote.

Without Michael Tomlinson and the Cash committee she has no chance."