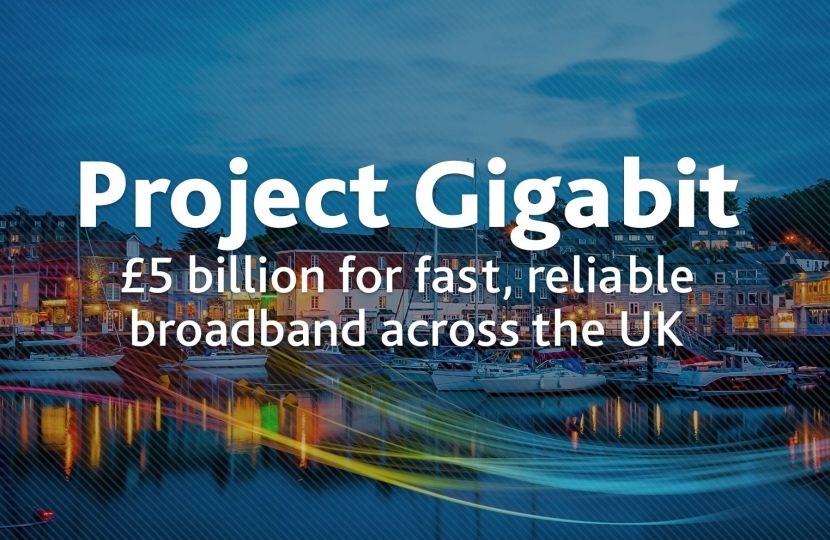 The Government have launched a £5 billion Project Gigabit that will see more than one million hard to reach homes and businesses benefit from lightning fast broadband.

Homes and business across Dorset will reap the rewards of Project Gigabit, with next-generation broadband speeds built to them.

This project prioritises areas that currently have slow connections and which would otherwise have been left behind in broadband companies’ rollout plans, putting the investment in place to make their available speeds rocket to more than 1,000 megabits or one gigabit per second. It means families no longer having to battle over bandwidth and will give people in rural areas the freedom to live and work more flexibly. Contracts for these first areas will go to tender in the spring with spades in the ground in the first half of 2022.

Project Gigabit will also make £110 million available to connect public sector buildings such as GP surgeries, schools and libraries in hard to reach areas, as well as investing £210 million in the Gigabit Broadband Voucher scheme, which will help cover the installation costs of bringing gigabit connectivity to homes and businesses in rural areas.

In plugging in and powering up every corner of the United Kingdom, the Government is helping to accelerate our recovery from the pandemic and level up the country, creating jobs and spreading wealth across Britain as we build back better.

Michael said "I'm delighted that Dorset is one of the first areas to benefit from this project. I know many residents struggle with slow broadband, and it's incredibly important that those areas with the slowest speeds are targeted for improvement"

Following the continued efforts of everyone in Dorset and BCP, and everyone across the country, as well as the remarkable success of our vaccine rollout, the Prime Minister has announced that we will be moving to Step 2 of our Roadmap Out of Lockdown on time as planned (Monday 12 April).