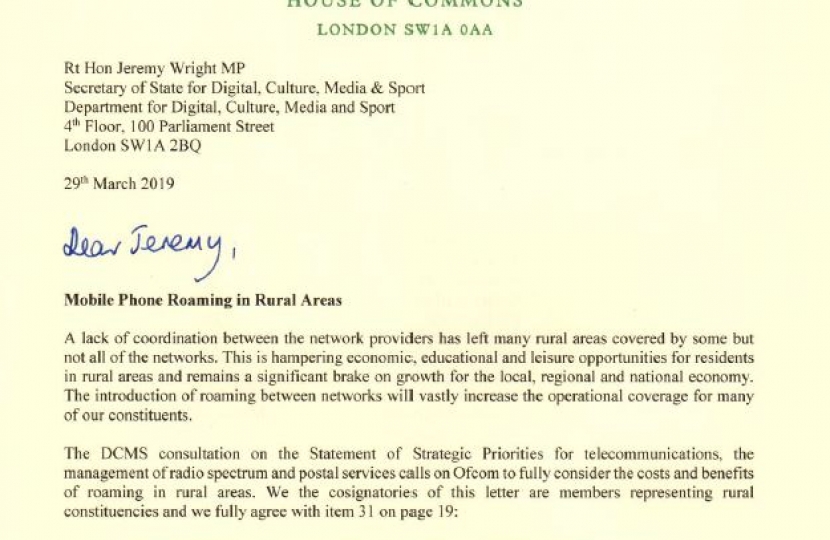 Michael was pleased to be a co-signatory to a letter to the Secretary of State, for Digital, Culture, Media and Sport, Jeremy Wright MP, to ask the Government to make a requirement that network operators enable roaming between providers to improve mobile coverage in rural areas.

Kevin Hollinrake MP, who wrote the letter, said “A lack of co-ordination between the network providers has left many rural areas covered by some but not all the networks. This is hampering economic, educational and leisure opportunities for residents in rural areas and remains a significant brake on growth for the local, regional and national economy. The introduction of roaming services between networks will vastly increase the operational coverage for many of our constituents”.

Michael said "Here in Dorset we have many "not-spots" and partial not-spots, and I hope that this will end through the use of roaming."

In some parts of the country, mainly in rural areas, patchy, intermittent coverage means that many people have limited or no access to mobile coverage. Mr Hollinrake said that he and the co-signatories of the letter supported the Government’s Strategic Priorities for Ofcom, the telecommunications regulator, which calls on the authority to fully consider the costs and benefits of roaming in rural areas. Whilst Ofcom has agreed that ‘co-operations of operators’ would improve mobile coverage, the MPs are urging the Secretary of State to take it one step further and make it a requirement of network providers to deliver it.

The Government has pledged to ensure that there is mobile coverage to 95% of the UK by 2022 but this will still leave many areas without a workable signal.

The health Secretary Matt Hancock has urged all those people in the South West who are eligible for the flu jab to get one this winter, as the government launches its drive to vaccinate 30 million people.