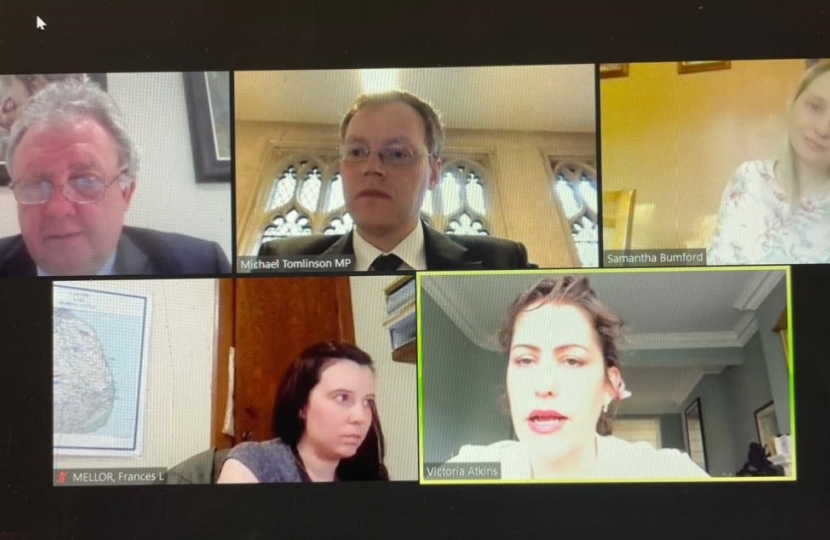 Protection for victims of stalking was discussed at a recent meeting Dorset campaigners and Victoria Atkins, Parliamentary Under-Secretary of State for Safeguarding.

The meeting was arranged by Michael Tomlinson MP and gave the opportunity for Samantha Bumford, who is a victim of stalking, and Police & Crime Commissioner candidate David Sidwick the opportunity to raise their concerns with the Minister. The meeting, held the day before the landmark Domestic Abuse Bill was debated in Parliament is part of an ongoing campaign by Samantha and David to increase the support given to victims and to highlight the seriousness of stalking.

Samantha said “Since 2018 I have been stalked by the same person. He was not my partner and at the beginning I didn’t even know him. I want other women to watch out for the signs of stalking after a 2 year ordeal that made me afraid to even leave the house.

I went to court a few times and my stalker was first jailed in 2019 for 23 weeks, after he cornered me on her way to work, telling me to unblock him from social media. During this court hearing I was told he had 19 previous convictions and I broke down on my dad in the court room.

After the hearing I was offered a lifetime restraining order over him. Meaning he cannot contact me directly or indirectly. He breached this shortly after coming out of court having served the 23 weeks so I put him back in jail where he did another 6 months and he came out on a tag.

I am really pushing to help people being stalked to see the signs hopefully earlier than me. It took for him to follow me to work and corner me for me to call the police to then find out about these 19 previous convictions?

I am working with David Sidwick and Michael Tomlinson (my local MP) to help other victims of stalking. I am very grateful to the Minister for her time and for understanding the issue so clearly. She set out how the Government is seeking to support victims and punish stalkers. It was good to have the chance to highlight my personal experiences and push for further support.”

Dorset Police & Crime Commissioner David Sidwick added “I have been supporting Samantha and her excellent campaign on behalf of stalking victims for a number of years. This is an important issue and I am keen to ensure that everything possible is being done locally to protect victims of this horrible crime.”

The meeting, held virtually due to ongoing Coronavirus restrictions, discussed the importance of Stalking Protection Orders as well as the need to support victims by increasing the awareness of how to report stalking.

Michael Tomlinson said "Both Samantha and David have been excellent campaigners for stalking victims. I am grateful to David Sidwick for raising this with me and for Samantha’s ongoing efforts and bravery in sharing her story."

Minister Victoria Atkins said, "Every year, thousands of people live with the terrifying experience of being stalked. I am very grateful to Samantha for sharing her powerful story of this insidious crime. I am determined that we do everything we can to better protect victims and stop perpetrators at the earliest opportunity."

Public health has always been at the heart of our international travel policy – and with more than eight in ten adults fully vaccinated in the UK, we are now able to introduce an updated system.