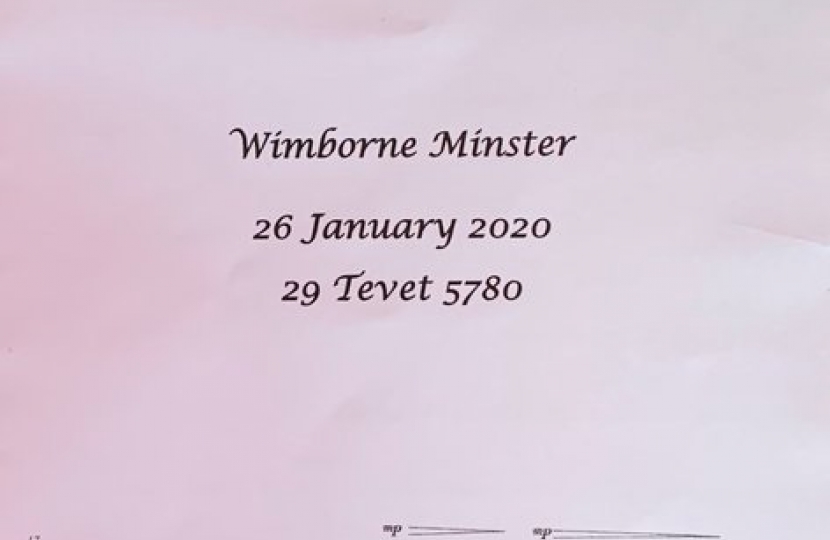 Michael was honoured to be asked to share some thoughts about his visit to Yad Vashem at the recent Holocaust Memorial service in Wimborne Minster. Yad Vashem is the Yad Vashem is the official memorial to the victims of the Holocaust in Israel. It is dedicated to preserving the memory of the dead; to honouring Jews and Gentiles alike - who fought against Nazi oppression.

Michael visited a few years ago.

This is what he said at the service:

Yad Vashem is the official memorial to the victims of the Holocaust in Israel. It is dedicated to preserving the memory of the dead; to honouring Jews and Gentiles alike - who fought against Nazi oppression - and providing an institution and space to research the Holocaust in particular and genocide in general, to ensure this never happens again.

About a year after I first became your Member of Parliament, I had the privilege of visiting Israel and the West Bank with the Conservative Friends of Israel.  CFI is a group dedicated to strengthening business, cultural and political ties between the United Kingdom and Israel.

As part of the delegation, we visited Yad Vashem and learned more about the Holocaust and the rise of anti-Semitism  -   the different causes -  culminating in Nazi Germany; World War two and the death camps. It was hugely moving - a difficult but important visit.

At times I had to force myself to look at the photographs documenting what happened and to listen to the first-hand accounts.  It would have been too easy to turn away.

We saw different sorts of forms of anti-Semitism and had a real mixture of emotions:  anger, compassion, tears, rage, frustration, incomprehension.  It showed evil so clearly - and just how low humanity can sink.

It is trite to say that it must never happen again – and yet all politicians must  understand better the route to evil and the slippery slope to anti-Semitism.

It was very upsetting and powerful – in my view it should be compulsory for all politicians.

Let me end with the words of Benjamin Fondane
Murdered at Auschwitz, 1944

Remember only that I was innocent
and, just like you, mortal on that day,
I, too, had had a face marked by rage, by pity and joy,
quite simply, a human face!”

Our visit to Yad Vashem finished with the hall of names, a memorial to each and every Jew who perished in the Holocaust   –   And then to the balcony and the exit. The ceiling opens up and the dramatic view of modern-day Jerusalem bursts forth - the mountain’s slope as the backdrop.

And then into the sunshine and on to hope.