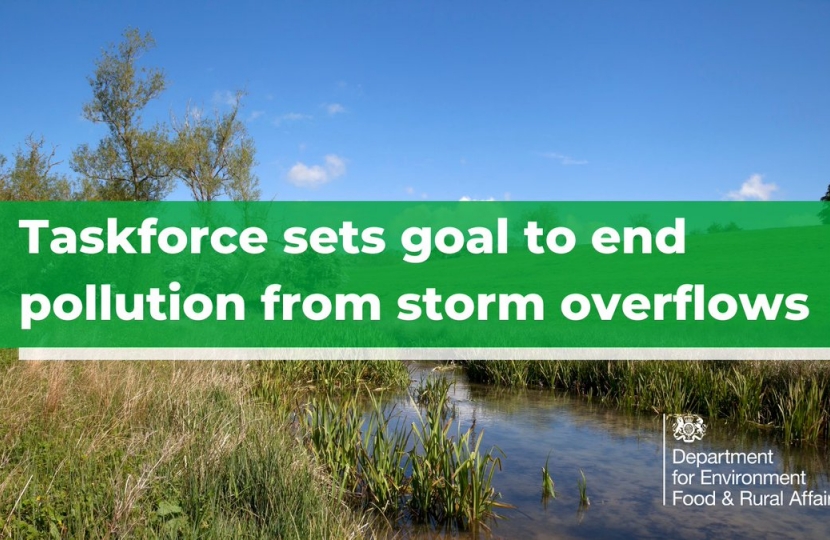 MPs across the South West are supporting fresh moves by industry and government to tackle river and water pollution.

The Storm Overflows Taskforce – made up of Defra, the Environment Agency, Ofwat, the Consumer Council for Water, Blueprint for Water and Water UK – has today agreed to set a long-term goal to eliminate harm from storm overflows.

Following recommendations from the taskforce, water companies will also increase transparency around when and how storm overflows are used.

Environment Minister Rebecca Pow, the MP for Taunton Deane, highlighted the “collective commitment for change in this critical area”.

Storm overflows were designed to be used during extreme weather to prevent sewers becoming overloaded with a combination of sewage and rainwater, releasing diluted wastewater into rivers rather than letting it back up into people’s homes.

However, climate change has led to increased rainfall and water infrastructure has not kept pace with development growth over decades.

Water companies have agreed to make real-time data on sewage discharges available at bathing sites all year round, meaning surfers, swimmers and other water users can check the latest information, especially after heavy rainfall.Water companies will also accelerate work to install monitoring devices to create a complete picture of their activity by 2023.

In addition, the taskforce has agreed with water companies that they will publish annual monitoring data on their websites about their use of storm overflows so progress in reducing their use can be tracked.

The Environment Agency will compile this data into an annual report that is easily accessible to the public.

The taskforce update comes as the government confirms it is working with Philip Dunne, the MP for Ludlow, on shared ambitions to tackle sewage pollution in rivers.  The Sewage (Inland Waters) Bill, introduced by Mr Dunne to Parliament last year, has raised awareness of a number of issues associated with storm overflows.

The government has committed to continuing to work with Mr Dunne on the best way to make progress in reducing the harm caused by sewage spilling into rivers.Since 2010, 884 storm overflows have been improved to reduce their environmental impact and frequency of operation, with a further 798 improvements planned for the period from 2020 to 2025.

Rebecca Pow said: “Making sure we have clean rivers is an absolute priority and I have been clear that I want to cut down on the water sector’s reliance on storm overflows. The Storm Overflows Taskforce, established last year, is working urgently on options to tackle this issue, which demonstrates a collective commitment for change in this critical area.Our ambitious Environment Bill already sets out how we will tackle various sources of water pollution.I look forward to working with Philip Dunne and others on how we can accelerate progress in this area.”