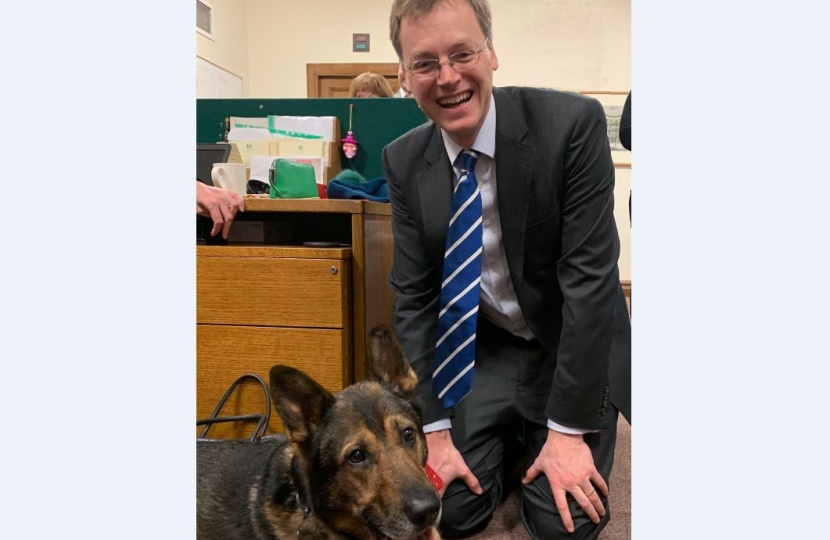 Many people have written to Michael asking him to support Finn's Law.

“On October 5th 2016 my police dog, Finn and I were chasing a robbery suspect when he turned and attacked us. Finn sustained serious stab wounds to the chest and head whilst protecting me. I sustained a stab wound to the hand.

Finn stopped the knife from reaching me and saved my life. Even after being stabbed through the lung Finn did not let go of the suspect until other Police Units arrived and arrested him. Finn was not expected to make it through the night. The suspect was charged with ABH for the injuries to me and only criminal damage for the horrific injuries to Finn.

This is currently one of the available charges for someone who seriously injures or kills a police or service animal in the line of duty, as they are considered as being property. I hope you agree that is not acceptable, Finn isn’t a plant pot or window and should not be treated as such. Eventually after more than 6 months of legal arguments our attacker was found guilty” – PC Dave Wardell

Michael was delighted to have been in the House of Commons today to support the unanimous passing of the Animal welfare (Service Animals) Bill. He also got the chance to meet the dog behind the law!

Michael recently visited Dexter Sports club, to hear about the club and their plans for the future. He chatted to the club's chairman, and volunteers.