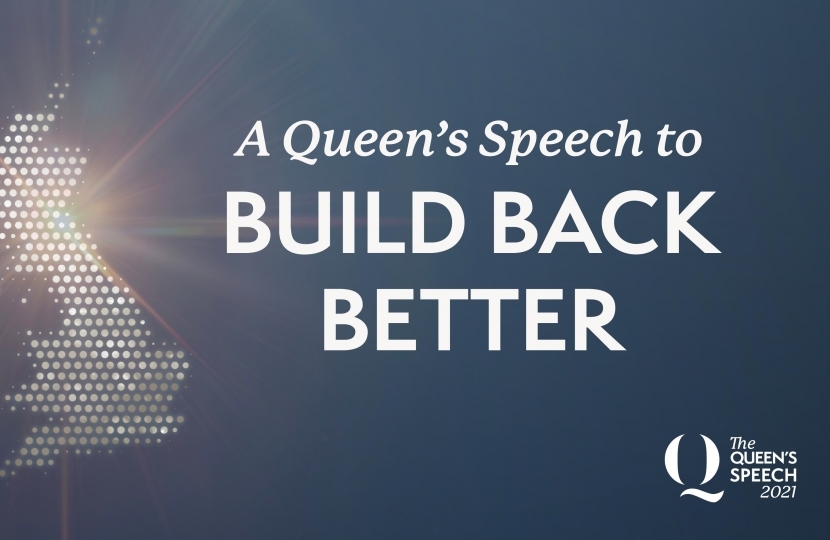 Today, Her Majesty laid out the Queen’s Speech, which presents the Government’s priorities going forward. The Government is determined to deliver a national recovery from the pandemic that makes the United Kingdom stronger, healthier and more prosperous than before. To achieve this, we will level up opportunities across all parts of the UK as we build back better. Included in the Queen’s Speech was:

Through the Health and Care Bill, we will protect the health of the nation, empowering the NHS to innovate and embrace technology and enabling more tailored and preventative care which is closer to home. We will also bring measures forward to tackle obesity and improve mental health, as well as proposals on social care reform.

Through the Advanced Research and Invention Agency Bill, we will oversee the fastest ever increase in public funding for research and development, as well as pass legislation to establish an advanced research agency.

Strengthening economic ties across the union

The High Speed Rail Bill will take forward proposals to transform connectivity by rail and bus from Crewe to Manchester, and the Product Security and Telecommunications Infrastructure Bill will extend 5G mobile coverage and gigabit capable broadband.

The Skills and Post-16 Education Bill will enable flexible access to high quality education and training throughout people’s lives.

The Subsidy Control Bill will introduce measures to ensure that support for businesses reflects the UK’s strategic interests and drives economic growth, while the Procurement Bill will simplify procurement in the public sector. We are also introducing eight new Freeports, which will create hubs for trade, innovation, and regenerate communities which feel left behind.

Measures will be introduced to ensure that children have the best start in life and make up lost learning during the pandemic, so that every child can realise their full potential.

The Planning Bill and Ground Rent Bill will introduce laws to modernise the planning system and end the practice of ground rents for new leasehold properties, and the Building Safety Bill will establish in law a new Building Safety Regulator.

Measures will be brought forward to address racial and ethnic disparities and ban conversion therapy.

The Dormant Assets Bill and Charities Bill will support the voluntary sector by reducing unnecessary bureaucracy and release additional funds for good causes.

The Environment Bill will invest in new green industries to create jobs, while protecting the environment. The United Kingdom is committed to achieving net zero greenhouse gas emissions by 2050 and will continue to lead the way internationally by hosting the COP26 Summit in Glasgow. Legislation will also set binding environmental targets.

The Animal Welfare Bill will bring legislation forward to ensure the UK has, and promotes, the highest animal welfare standards.

Democracy and the Constitution

The Electoral Integrity Bill, Higher Education (Freedom of Speech) Bill, Judicial Review Bill,, and Dissolution and Calling of Parliament Bill will ensure the integrity of elections, protect freedom of speech, and restore the balance of power between the executive, legislature and the courts.

The Police, Crime, Sentencing and Courts Bill will increase sentences for the most serious and violent offenders, while the Draft Victims Bill will bring forward proposals to address violence, including against women and girls, and support victims. Through the Draft Online Safety Bill, we will ensure internet safety for all, especially children.

The New Plan for Immigration Legislation will establish a fairer immigration system and deter criminals who facilitate dangerous journeys through people smuggling.

We are providing our fantastic Armed Forces with the biggest spending increase in thirty years and taking forward their programme of modernisation to ensure our defences are fit for the Twenty First Century. The Armed Forces Bill will honour and place into law the Armed Forces Covenant and the National Insurance Contributions Bill will provide National Insurance contribution relief for employers of our veterans. Finally, we will implement the Integrated Review of Security, Defence, Development and Foreign Policy, and introduce legislation to counter hostile activity by foreign states through the Counter-State Threats Bill.

The United Kingdom will host the G7 Summit and lead the global effort to secure a robust economic recovery from the pandemic. We will also provide aid where it has the greatest impact in reducing poverty and human suffering abroad, and we will take forward a global effort to get 40 million girls across the world into school. Finally, we will deepen trade ties in the Gulf, Africa and the Indo-Pacific.

You can read the full Queen's Speech here.

"It was excellent to see Her Majesty the Queen looking so well and attending Parliament. Our traditions of Black Rod and the procession to the House of Lords were there as always, but scaled back due to covid restrictions. Just as important as these traditions was the legislative program that the Queen read out. Lots of important Bills including those on animal welfare, the environment and education".

This week marks a new dawn in our relationship with Australia, underpinned by our shared history and common values.